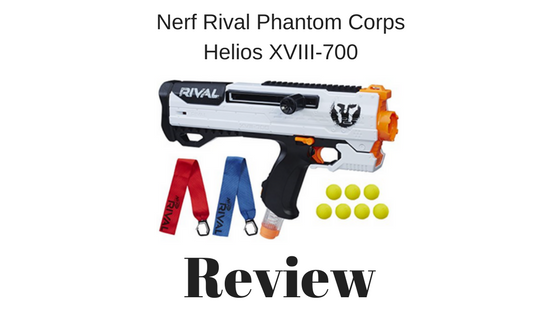 What Is The Nerf Rival Phantom Corps Helios XVIII-700?

The Nerf Rival Series is crazy when you need to make some high-powered shots! When you can take the awesome power and design of The Nerf Rival Apollo and upgrade it to make it fit your shoulder better and reload faster, you end up with The Helios!

*Magazine Release Is Located At The Bottom Of The Handle 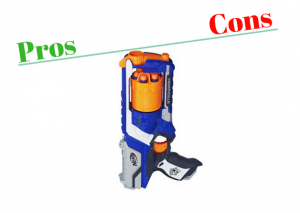 I’m going to combine the first pro with the only con, The Spring Loaded Priming Mechanism is awesome, allowing you to simply pull back and release, allowing the Helios to do all the work (Let It!), but if you interrupt the spring action return, you will find yourself clearing a lot more jams, which if left uncleared through the side jam door will lead to more jams and eventually destruction of your Helios…

The Helios has a trigger lock and a rear priming indicator allowing you to know your Helios is primed and ready to fire while you switch the trigger lock on to make sure no unintended shots are taken while you are on the run! When you are ready to fire, the stock on The Helios is much better than the Apollo, this stock allows you to fit into your shoulder to pull back and release your priming mechanism quickly!

Who Is The Nerf Rival Phantom Corps Helios XVIII-700 For?

The Nerf Rival Series is rated for ages 14+, however I am a firm believer in Nerf Gun Fun For All, so I like to leave the ultimate choice up to the parent whether the younger ones are ready to wield the power of a Rival Nerf Gun. Parents, put your kids to the test, if they can’t harness the power… You sure can!

Nerf High Impact Rounds are pretty good for getting some close to mid range action and landing some shots, but the further way you get, the lower your accuracy becomes and the overall impact diminishes. So if you are someone who doesn’t mind getting up close and personal in the heat of a Nerf Battle, you might consider The Helios. There is also the option of Offices, Parks, and just home battles, if you can get a good angle and you are close enough, you have a good chance of dominating your competition!

If you are already a seasoned Nerf War Vet, you may be considering a new primary Nerf Gun. When you run into action with The Phantom Corps Helios, simply pull back on the priming mechanism (you choose the side it goes on), allow it to snap back on its own, and be ready to take out any target that comes into sight!

Is The Nerf Rival Phantom Corps Helios XVIII-700 Worth The Price?

Before I Ever Make My Final Decision, I Always Have To Ask…

With any Rival Nerf Gun, you know you are in for some power, but each one has their own little twist, The Nerf Rival Phantom Corps Helios XVIII-700 is no different, with the spring action that returns the priming mechanism and loads the next High Impact Round, you are in for fast repriming and firing one High Impact Round after another.

The fact that you can add on any attachment to the top tactical rail, gives you option of how you want to aim and how you plan to attack, on top of that, you can upgrade your magazine to a 12 Nerf High Impact Round Magazine, allowing you to take out more targets before reloading!

Yes, I Say The Nerf Rival Phantom Corps Helios XVIII-700 Is Worth The Price!

I love the Nerf Rival Series, I love power, I love High Impact, but what I love most, is the new-look of The Nerf Rival Phantom Corps. Not only do you get the power of The Rival Series, but you have the option of what side to be on, every time. If you have a red or blue Rival Nerf Gun, you are almost guaranteed to be on that team, with The Phantom Corps, you always have a choice!

My Final Opinion of The Nerf Rival Phantom Corps Helios XVIII-700 is that I really like the overall design, ability to upgrade your magazine, The High Impact Of The Rival Series, the easy to read priming indicator, I’m not a huge fan of the safety but I can see how it can be useful if you don’t trust yourself or maybe someone else… Make sure they don’t prefire with the safety.

Finally, there is a bunch of claims of jamming issues, but this is most likely due to the fact they are not letting their Helios do the work for them, pull back on the priming mechanism and allow the spring action to slam it back into place, if there is a jam, repull your priming mechanism by pushing the button to release the mechanism and remove the jam through the left side jam door.

NerfGunRUs.com works with Amazon.com to make sure you find the Nerf Gun that fits your style of Nerf Combat and then allows you to simply click a banner to make your safe and secure purchase through Amazon.com.

The Phatom Corps Helios is quite the Nerf Gun to be added to The Nerf Rival Series, with upgraded features from The Nerf Rival Apollo, I say the Helios is the clear choice of the better Nerf Gun, but that is all about how you use your Nerf Guns!

Let Me Know In The Comments Below!

Your Comments Will Help Others Get An Edge On Their Enemy!

Nerf Gun Fun For All! 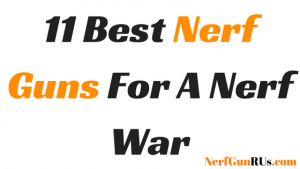